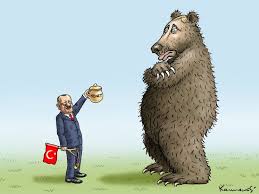 At present, it is hard to think of the Turkish President in glowing terms, mainly because his power stems from street violence, and the many vociferous supporters who gladly undertake his dirty work. To understand why this is, is probably to understand Turkey itself - to some extent its postmodern history - and its formation in the hands of Mustafa Kemal Ataturk.

Although it is clear that Erdogan is a man of the people, it is also hard not to notice his ambiguous stance on Islam, his political gambles, his ruthless pursuit of power, and finally, his unique brand of demagoguery. Claiming to maintain the principles of Ataturks Turkey, it may be that he has quite a different venue in mind.

No matter how many portraits we may see of Ataturk, hanging in Turkish government offices, within the shops and bazaars or even modern shopping malls, it is clear that Atatuk’s latter day successor, is hell bent on reversing many of the principles of a secular society, replacing it with an Islamic state, and finally, his own brand of dictatorship.

Erdogan likes to be listened to a lot, and famous for his interminable speeches, there is no doubt in my mind, that he was directly responsible for a dose of food poisoning I suffered - together with a guest - when we visited the town or Edirne, and a well known restaurant, during the 2015 local authority elections.

Contrary to Turkish Presidential rules, and loudly broadcasting over the local tannoy system, Erdogan regaled the people of Turkey, with his unique brand of political impartiality. This unending political rant – in his trademark loud and monotonous voice - was so absorbing, that the restaurant staff managed to poison the only customers they had that afternoon, or, more accurately, two bloody foreigners interrupting the political debate.

Emanating from relatively humble beginnings, Erdogan is the sum of his many myths, and likes to be seen as a man from the streets. Yet he is building the largest palace in the western world, on the site of the Ataturk Forest and Zoo in the capital, Ankara. Cause for the people of Ankara to demonstrate in the streets, their intransigence was finally stemmed, by Erdogans good old standby; a dose of police brutality.

Sounding more like Saddam Husein, than a man wishing to join the European Union - and its many ‘almost’ federated states- it is hard to see this ever happening, in my view, within the next hundred years or so. And what about visa free travel to the EU for all Turks? Well, the jury is still out on that point, and many European politicians are now regretting, trying to play the Turkish President at his own game.So what has happened in the recent past?

Erdogan has shot down a Russian bomber, which has upset his nemesis Vladimir Putin and although Putin is his secret role model, he has managed to close the door to the largest vegetable market in Eastern Europe, and his own burgeoning Turkish tourist industry.

He has agreed to let the USA fly their missions to Syria and Iraq from Turkey, whilst bombing the hell out of the Kurds as a trade off, and blaming the Kurds for almost everything, including ISIS bombs and terrorist attacks.

In the event of a Turkish Army uprising, "intended to encourage a carefully considered regimen of secularism," although he has managed to put down this recent so called coup d’etat, he is now advocating a return to capital punishment, whilst arresting half the Turkish judiciary, detaining a couple of Turkish armies, and accusing them of all of being traitorous. If he is right, the hangman will be pleased! So where does this ex footballer, - myth maker, ex jailbird and professional loudmouth - stand right now?

There is no question about who his supporters are, many of whom have been enjoying the rewards of a Turkish economic revival, but they also view the EU as their natural marketplace, or even the poor Brexited UK! However, even demagogues can’t manipulate the entire western world, and when the US starts to have second thoughts about Erdogans place in Europe, as Turkey begins to look like just another blighted Middle Eastern state, what will our man of the people do then?