Food for Oil – By Patrick Brigham . 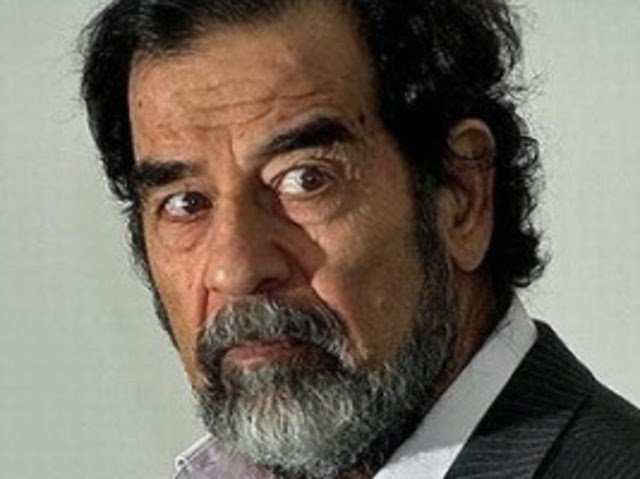 It was 2004, and Kevin Irrawaddi Patel gazed despondently at the newspaper account of Saddam Hussein’s famous List of Largess, or Barrelgate as it had become known. Noticing how absurdly his name had been placed next to that of Mr. George Galloway - the ex New Labour MP – some Bulgarian professor, and half the government ministers of the Russian Federation, he was considerably baffled.

As he stared at an account of the billions of barrels of crude oil Russia had received for the Iraqi Oil for Food Program, his own published score of one single barrel seemed woefully insignificant. Astonished at the vast amounts of crude oil given to these other individuals – and for enormously spurious reasons - he sat in his Peckham corner-shop, trying to make sense of this dramatic life changing event. For what was, after all, a seemingly casual event that had taken place two years previously, his somewhat dubious place in history, had now been assured. But what had actually happened?

It had been a wet Wednesday, in the autumn of 2002, and he remembered it well. Accustomed as he was to visits by all the nutters in Avondale Rise, it was no surprise to him to see a burly Arab looking man entering his shop, lugging a large metal barrel.

“What you got there mate,” said Kevin in his typical South London Bombay accent, whilst viewing the shiny barrel with some suspicion.

The man glared at him as if Kevin was a total tosser - “I’ve brought you some oil,” said the windswept and dripping man, as he took off his beret, and shook off the rain. 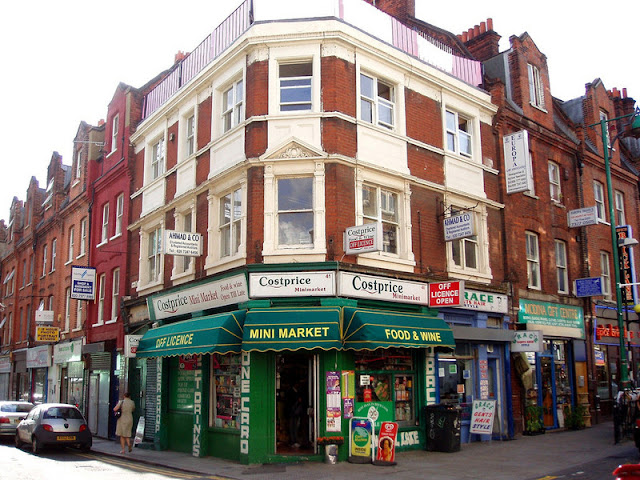 “Do you mind,” said Kevin, “You will make the floor wet!”

The dark haired man fixed him with an icy stare - “Well, where do you want it, then?” His gruff voice made it sound less like a question, and than an order.

How odd, thought Kevin, he seems to be wearing some sort of uniform under his mackintosh - “If it is for the Greek chippy,” he said, pointing through the door, “It's in the next street, you should ask for Stavros.”

But by now, the man's demeanour had become even more threatening - “It's not that kind of oil, you Indian git,” the stranger said.

His penetrating eyes now seemed more familiar to Kevin, and he instinctively backed into the Mars Bar and Twix rack, which was immediately behind him, causing three boxes of Smarties to simultaneously hit the floor. Bursting open as he mistakenly trod on them, the contents scattered, leaving them to rattle around the shop like multi coloured ball bearings, as they went flying.

“You look like that Iraqi bloke Saddam what’s-his-name,” Kevin’s face gleamed with nervous self-satisfaction, as he demonstrated his considerable knowledge of world events.

But the man showed not signs of response - “This is Iraqi Heavy,” the man said stiffly, “I have brought it to Peckham on the UN Food for Oil Program. So, don’t mess me about, or I will get really annoyed.”

Kevin searched his mind for some connection between the humdrum existence, he experienced, in the nether regions of Avonmore Rise, and this man's last remark. Finally, his face lit up. 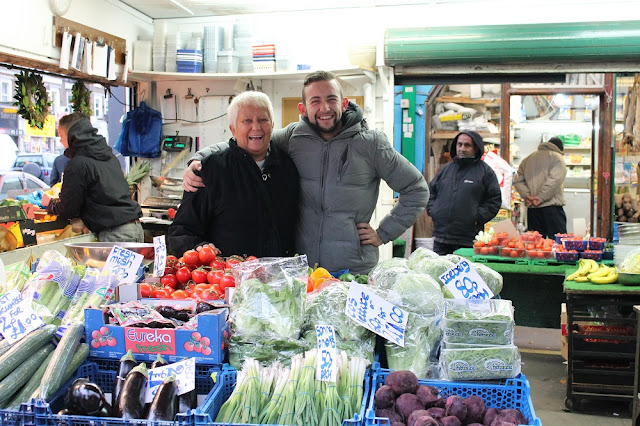 “Is that the cooking program on ITV with Marco Pierre White? You know, the chef who gets pissed in the kitchen, and finally thumps one of the waiters? Wicked.”

At this Saddam – whose age was estimated at between 35 and 140 years – and shouting with consummate rage, banged his fist on the counter.

“Listen to me, you Indian wally, I am extremely hungry. So stop pissing around will you, and give me some food, or I will go get some WMD, and give you a bit of really serious grief.”

Not wishing to aggravate this newly discovered Middle-Eastern nutter more than absolutely necessary, Kevin wisely did not ask the question, which now lay dormant on his lips.

Was WMD an acronym for something he had once heard on the news, or was it Magic Roundabout? Perhaps it stood for William Morris Designs, or even Waitrose Marketing Department; he was unsure. But, his silence probably saved his life.

“What’s that barrel worth, then mate?” Kevin’s mind raced as finally the fear of the moment gripped him. Realizing his imminent danger, his only thought was how he might get rid of this obviously deranged and obnoxious man. The Police were no good, and would probably turn up the following week, and granny Patel was deaf, so there was no point in shouting up the stairs. So he decided he had better comply with the nutters demands. 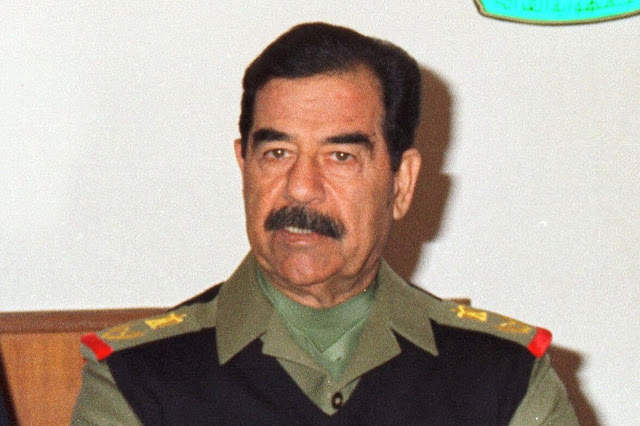 “Twenty five dollars US,” was the curt reply “Which does not include delivery, because this week it is on a free offer. So make up your mind quickly!”

Kevin didn’t know much about dollars, or even euros for that matter, and although the occasional rupee had passed hands in his shop, he doubted whether that nice Mr. Bush or any other American would ever visit Peckham.

Anyway, according to the newspapers – of which he had hundreds for sale, but rarely read – Mr. Bush probably thought that Peckham was a suburb of Peking, and Iraq an island off the coast of Cuba. Nevertheless, it was obvious he would have to give this man something, or he would never go away.

“Well,” said Kevin, “ I have thought about it very carefully, sir, and I am prepared to give you a bag of cheese and onion crisps, some frozen sausage rolls, a box of Cadbury’s chocolate fingers, and a bag of King Edwards. But, that's the best I can do for you I am afraid!”

Saddam glared at him and spluttered “What? You bastard! Last night I got the full monty for my other barrel, from the Star on India in Westbourne Grove, and they gave me extra chutney as well. So you had better watch it, you insignificant Indian twat!”

Furious, Saddam grabbed the cheese and onion crisps, the frozen sausage rolls, the spuds, and the box of Cadbury’s chocolate fingers, and stormed out of the shop. As he did so, he slammed the door so hard, that everything in the shop wobbled, leaving Kevin baffled and perplexed. Contemplating what to do with the shiny barrel of oil, which now stood next to the counter, his problem seemed insurmountable.

It was February 2004, and the barrel continued to sit unmoved, in the corner of the shop, but it was now used to support a rack displaying assorted dog food. Fido, the Finest Food for your Pet, it announced, with a further big sign saying Special Offer. The sign on the barrel simply said Iraqi Oil for Sale, and nothing else. But, alas, nobody was much interested in either commodity, because, there were very few dogs living in Avonmore Road, and the nearest oil refinery was in Depford. After he reported the incident to the local community watch, a number of days passed, before the visits began.

First to appear was a funny sort of policeman, with a red nose, a plumy accent, and wearing a scruffy green Barbour jacket. He demanded to know the whole story from Kevin, or else he would have to go down to the local Police Station for a thorough grilling. So Kevin blurted out the whole story, confirming even the most insignificant details.

“Yes, I think that must have been him after all,” the red nosed man said, leaving a business card stating that he worked for the Ministry of Agriculture. After him, it was the press.

Second to appear was a reporter from the Peckham Gazette, who entered the shop with some apprehension, knowing some of the basic truths behind the Food for Oil report. But his interest was of a local nature, and it was Kevin who was now in the limelight!

“What did he look like Kev?” Sidney Nodes knew how to keep his reading public entertained.

“He was some geezer, but a bit of a Muppet, really,” Kevins mind casually harped back to his strange encounter. “He kept going on about extra chutney at the Star of India, for some reason, and something about WMD, whatever that is?”

Having heard the food for oil deal Kevin had been forced to comply with, Sidney Nodes asked for a bag of cheese and onion crisps, in order somehow to feel closer to this bizarre incident, and – foregoing the Cadbury’s chocolate fingers – a packet of Silk Cut cigarettes.

Lighting his first smoke of the day, Sidney Nodes mused – “Evan that nice Mr. Bush and Tony Blair don’t seem to know much about WMD either, according to the telly!”

The next day, the headlines in the Peckham Gazette announced – ‘Saddam Demands Cadbury’s Chocolate Fingers.’

Sidney Nodes knew that it was not very accurate, but that was the general condition of journalism at the time. The dailies didn’t say much either, being too busy Blair- bashing, so Kevin Irrawaddi Patel finally sank back once more, into obscurity.

Sidney Nodes wrote one more follow up story, for the Peckham Gazette, when Kevin Patel decided to change his image a bit, by renaming his shop. The new sign now proclaimed that it was, The Patel Emporium – Purveyors of Fine Food & Wines to World Leaders.