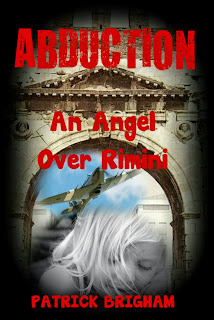 ABDUCTION An Angel over Rimini by Patrick Brigham -...

TITLE:  “Abduction: An angel Over Rimini," it is about Abduction and Human Trafficking.

Once in a great while, a novel is written that dives deeply into a real and present danger to children, from the poorest to richest countries. Such is the case with Patrick Brigham’s new book, An Angel Over Rimini – Abduction, Human Trafficking, which revolves around the abduction investigation of a little British girl from a campsite in Rimini, Italy.
An interview that promises to rock your understanding on the topic, Brigham describes how he used his many years a journalist to research and weave into this masterful work of fiction, the true and sometimes terrifying facts about abduction and human trafficking that are rarely included in statistics, or covered by the mainstream media.

Patrick Brigham was born and raised in Berkshire, England and has been a writer and journalist for many years. He is the author of several mystery novels including: Herodotus, Judas Goat and his latest book, An Angel Over Rimini – the subject of today’s interview.
In 1993 he decided to leave London and moved to Sofia in Bulgaria, where he set up the first English Language News Magazine in the Balkans called the Sofia Western News. As a journalist, he witnessed the dramatic political, economical, and social changes in this once hard core communist country.
Patrick’s popular mysteries novels feature fictional police detective Chief Inspector Michael Lambert.  And, although his books are fiction-based, Patrick accomplishes a tremendous amount of research and analysis in order to accurately portray the process of how abduction and human trafficking cases are handled, and solved. A master of storytelling, Patrick brings hard facts, realism and a great deal of awareness to the important underlying themes in each of his books.
Patrick Brigham now lives in Northern Greece, writing mystery novels. here are some of the questions and answers:-


1.    Why did you choose the topic of Abduction and Human Trafficking for your book?
Answer: - The Greeks have recently built a fence next to the River Evros which is their border with Turkey. It is estimated that over 50,000 illegal immigrants have crossed this border in the past, the Turks making little effort to stop them. These days the numbers have dramatically decreased, but the costs of policing are a great burden to this little indebted Balkan country, despite the support of Frontex police and Brussels. I live close to the River Evros and in order for you to understand the extent of the problem that existed in the past and still does to some extent; I would like to present the following scenario to you. Can you imagine going to the shops where you live, only to be confronted by a group of Taliban tribes’ men and women? Can you imagine a trip down some isolated farm track in order to visit a little Greek church, only to be stopped by some polite Bangladeshi people and asked the way to the nearest train station? This was the reality up until quite recently, although these days the numbers are much fewer and the smugglers now use other well tried and tested routes, we still see quite a few of these unfortunates, roaming the streets.


2.     Please tell us about the research you did on human trafficking what you learned about these activities in western societies.
Answer: - I am surrounded by tired and depressed police men and women, who know the realities of people trafficking. They have had to dredge the river for corpses, those who have either drowned, died of hypothermia, the cold, or have even been shot by the Turkish traffickers with their hunting rifles. These gangsters see migrants as valuable contraband, and their smuggling routes – which have existed since 1923 and partition – are simply regarded as a business conduit, through which to traffic people, cigarettes or drugs. Take your pick.


3.    I’ve seen a lot of different statistics about the scope of human trafficking.  Why don’t we have consistent numbers and more media coverage?
Answer: - The reason for these illegal immigrants being in Greece and Italy is simply a matter of war and political strife. The first to appear on the streets of Greece were the Albanian minorities from Serbia during the Milosevic years, closely followed by the Afghans or Iraqi’s and now the Syrians, Egyptians and even some Iranians. There have also been incidences of Al Qaeda terrorists using these smuggling channels and so until recently little Greece – itself a Christian bastion against the Islamic states – was suddenly the weak spot of Europe, alongside the immerging ex – Communist countries of Eastern Europe and the Balkans. Clearly the result of war, it has been in the West’s interests to put the blame on economic migration; Messers Bush and Blair having neglected to calculate the true costs involved, when they enthusiastically went to war. So, it is only quite recently that the truth has leaked out – not only about the numbers involved – but the fatalities too. This indifference must be further underlined, when we hear our politicians blaming these poor unfortunates for taking away jobs from indigenous workers in their country of settlement. Nobody wanted to sweep the streets then, and suddenly they do today? This is why we have heard so little in the past.


4.    What kinds of cases did you research for your story development and why did you choose a young English girl?
Answer: - The ongoing investigation in Portugal concerning the whereabouts of Madi McCann has been my main inspiration. A botched investigation by the Portuguese police, unfounded accusations that her parents were responsible for her death, and finally, the intervention of the British authorities and news media, brought the whole matter once more back into the light. Clearly a question of xenophobia, prejudice, ignorance and indifference; a turf war between the two countries authorities seems to have occurred at some point and together with a shortage of police resources, meant that the fate of Madi McCann was practically forgotten. However, a new investigation is presently under way. I also decided to take the abduction to Italy because it fitted more easily into my route through Greece, Bulgaria and finally into northern Europe. In my opinion Italy seems to have some challenging problems with their justice system – the case of Amanda Knox comes to mind – and I could see a similar problems occurring with an investigation by the State Police in Rimini, a well known Italian holiday destination.


5.    What happens to the trafficker when he is captured and a victim is rescued?
Answer: - The traffickers are Turkish/Greek, Bulgarian/Turkish, German/Turks, German/Greeks, Greeks, Turks and Bulgarians. No longer a divided Europe, these are the people who make for a well organized smuggling operation. Once great enemy’s the Turks and the Greeks get together in places like Hamburg in Germany and with the Schengen cross border agreement in place, the whole of the EU is at their feet. DCI Michael Lambert, my protagonist, is a Europol Liaison Officer which is the EU equivalent of the FBI in the US. He arrives in Italy, only to find the previously mentioned chaos, and quietly unravels the events which encapsulate this cold case. Ignoring the Italian police’ investigation, he follows the evidence to Greece and thence to Bulgaria and back into Central Europe. In Greece he  tracks down some traffickers who are arrested by the Greek authorities and through them he finds he way into the crooked Bulgarian court system, only to discover who and how certain unprincipled lawyers have arranged illegal adoptions to childless couples in the West. Nearly all the traffickers and their cohorts end up in the overcrowded prisons in Greece or in Germany.


6.    Your book talks about illegal immigration – how are traffickers moving these children to other countries?
Answer: - In my fictional account you will see that the well tried holiday road routes through Europe are practically free of stop checks, most border crossings left open and with only the occasional check on ferries, rivers and canals, it is simple for these criminals to operate. Airports are the greatest threat to abductors and smugglers, and so generally they take their time and travel by road. In my book Abduction – An Angel over Rimini, I write of a ‘sorting house,’ in Greece, which is the hub for these operations and where various routes interlink and coalesce into the west.