Nationalism 'Vs' Brexit – by Patrick Brigham

I can’t vote in the forthcoming referendum, to determine Great Britain's future in Europe, and so I reserve the right to say what I like. To me the whole matter reeks of reactionary nationalism, versus very little common sense, pragmatism or sanity. Reality seems to have been thrown out with the baby, and the bath water, plus a great deal of soap; an opera full of competing arias and the most disastrous stage management on record.

I have never seen so many bumbling spluttering minor British MPs trying their best to get a media scoop and so many foolish national leaders, puffing out their chests and expounding childish mantras to a growing, and largely bored audience. 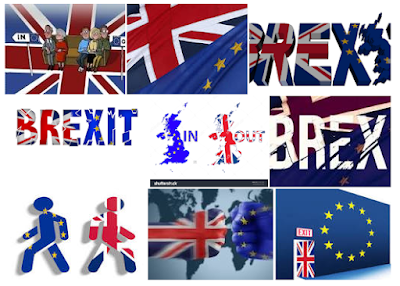 For those of you Brits, who may have opinions about this farcical program, I have made a list of those who can officially vote:-

Judging by the baffling and often inaccurate, so called facts and statistics - which the reactionary inhabitants of the UK frequently like to broadcast - they probably wish that the English Channel was a bit wider. Of course, there are those in Europe who might also wish this was true, as they watch the antics of a fading ex-colonial power, trying to reassert itself on the world stage. And why is it that a ‘special relationship’ with the US, always seems to appear, when things get rough? 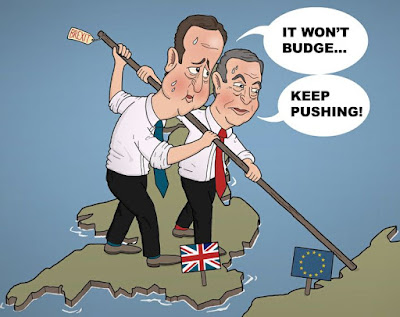 The eminent comedian and script writer, Spike Milligan, when asked during the Irish troubles what his solution would be, he said: ‘I would put a big post in the centre of Ireland, and tow it out into the Atlantic.’ Well, perhaps we should now put an even bigger post in the middle of the UK, and tow that out to sea. It could be next door neighbours with Greenland or Iceland – think of all those mosquitoes?

In an endeavour to seem very British and patriotic, many first and second generation immigrants have also lent their voices to the discussion, claiming that not only should the United Kingdom stand on its own, but it should be very concerned about immigration in general! Interviews in Bradford and Birmingham, have naturally attracted volunteers from the local community – posh voiced Asians and finger wagging West Indians – all of whom, quite rightly, regard the UK as their home and their true domain.

To some of the Eastern European countries, this might sound a little hypocritical, bearing in mind that well educated people from the Balkans have every right to seek employment anywhere in the EU - and very good news - considering the dearth of applicants from Britain itself. But one of the main arguments by the bumbling Brexit’s, is that this alone is a threat to UK sovereignty. They also like to ‘mix up’ prospective employees and legally entitled European citizens, with illegal immigrants from the Middle East and European Gypsy’s. It seems that UKIP, in particular, believes that their listening public, is as thick as Nigel himself appears to be at times, or shall we simply just call him foxy?

If I was from The Balkans – Bulgaria, Romania and Greece – or Central Europe, I would be getting into the political thrall, remind British citizens - or rather those who are allowed to vote - and point out, that there would be a number of empty desks in offices in and around Great Britain. And, there would also be, quite a number of vacant University places to fill, were the UK to decide to close its doors to Europe.

So, perhaps one should simply ask the question, what is Great Britain? Queen Elizabeth 1st could never quite make up her mind about love or country, and often confused the two:

I grieve and dare not show my discontent,
I love and yet am forced to seem to hate,
I do, yet dare not say I ever meant,
I seem stark mute, but inwardly do prate.