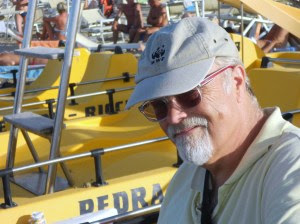 You cannot hope to bribe or twist,
Thank God for the British journalist.
But seeing what the man will do - unbribed,
There’s no occasion to.
Humbert Wolfe – The Uncelestial City

Hello Patrick, could you introduce yourself to my readers and tell them a bit more about yourself?
Leaving England in my late 40’s was not such a big wrench for me – as one might have imagined –but to go from a relatively civilized and cultured background to a country steeped in the remnants of Brezhnev and  Soviet  Communism was a challenge. This is where my story as a writer and journalist begins and where the very core of my murder mystery novels is to be found.

I understand that you lived in Bulgaria for more than 20 years. Why did you choose this particular country?

It chose me as a matter of fact, because even though I was aware of the immanent changes in the political structure of Eastern Europe, it was not until I met a certain Bulgarian writer that I even bothered to find it on the map. I asked him where Bulgaria was, and he said come and see for yourself. That was in 1985, and five years before the alleged changes.

How was it there in the beginning, coming from UK – a country with a well established democracy and culture – and going to an ex-communist country? It was quite a challenge I guess.

When I arrived to live there in1993, I think by then I had heard all the myths and precursors that a floored political system could invent for itself. It is not difficult to see the truth, if you look hard enough, and it was easy for me to see that Bulgaria was a floored democracy and a floored economy.

As a journalist, you had the opportunity to meet a few politicians and business man in that country. Can you tell us about a public person who impressed you the most, whether good or bad?

Most of the politicians were reinvented Communists, because that was how the country was run after the fall of Todor Zhivkov the Bulgarian Communist Party Chief Secretary. It was all a sham, including the house arrest of Zhivkov himself and also the absurd election of the nominated ex-Communist leaders. The first election was a total joke, the only difference between the old regime and the new being, better tailors, nicer cars and whiter teeth.

You recently published two novels, Herodotus – The Gnome of Sofia and Judas Goat – The Kennet Narrow Boat Mystery. Can you tell us a bit more about each of them; is there a common link about them?

The common link in a way is my experiences of Communism and my knowledge of the circumstances surrounding the political changes. In Herodotus – the Gnome of Sofia, I lampoon the remnants of the Cold War Mentality and the way that diplomats perceived the alleged democratization of Eastern Europe and the ignorance with which they approached the subject of political change. So, the story of Herodotus is mainly one of self indulgence and indifference, plus Herodotus himself of course, who is a garden gnome which MI6 has filled with highly technical spying apparatus, all ready for the 21st Century.

Judas Goat – The Kennet Narrow Boat Mystery is quite different, but it also partly takes place in Sofia Bulgaria, and is about an arms deal involving the purchase of a squadron of MiG29’s from Belorussia and also a small arms shipment to FARC terrorists in Columbia. This is a good murder mystery which starts off in the English countryside and then expands around the world, leaving various dead bodies in its wake.

Why did you choose these two particular subjects: the conspiracy and electronic espionage for Herodotus and such a complex murder mystery with international ramifications for Judas Goat? Are there some real facts which were inspired you?

Most writers are avid readers and in the case of Judas Goat, it was based on a newspaper report concerning certain individuals who were in the Peruvian Government during the 1990’s. In the public domain, it was a question of researching the circumstances and then fictionalizing the outcome into a novel. The main theme concerns an arms deal that has gone wrong, and the murder mystery is about tracking down the culprits and finding out the truth.

Where does your passion come for murders and crime investigation, because both books sound very professional to me; both full of technical details. The forensics reports, the electronic spying devices or the arms deal details are absolutely amazing.

Most of this stuff has been on TV for years! One might say that I was brought up with TV murder mystery from the 1960’s onwards. The technical details come from Wikipedia and elsewhere and represent a great deal of hidden study on my part. A similar electronic spying device was once discovered by the Russian secret service in Moscow – a few years back – apparently just outside the British Embassy!

Did you ask advice from an organization or from public services? And, did you get it?

I found SIPRI very useful when it came to details. They are an ‘independent think tank,’ in Sweden.

I understood that clever Detective Chief Inspector Lambert appears in both books. Are they part of a series?

He is only in Herodotus – The Gnome of Sofia in passing, but features heavily in Judas Goat – The Kennet Narrow Boat Mystery. My next book also involves the energetic and thoughtful Detective Chief Inspector Michael Lambert, who this time is employed by the newly formed Europol – European Police Organization – where his special skills are used to track down missing people and solving difficult historical cases, which have not always been satisfactorily investigated by local police.

What is the next book about and can you give us a clue?

DCI Lambert is asked to track down a young English girl who has been abducted from Southern Italy. Whilst he undertakes his duty as a policeman, he also finds himself retracing the wartime history of his own father who was stationed in Bari in Italy serving with an RAF Pathfinder Squadron. Whilst his travels are mainly to do with the missing little girl, he also discovers some disquieting revelations about his late father’s wartime service and his secret private life.

When do you expect this book to be published and what are your plans for the future?

Good question, because I have only recently begun writing, but early next year would seem reasonable.

What is the struggle point in the writing process for you and what is your advice for any aspiring writers?

Time is the enemy and writing needs discipline. I come from an old school of writers who fundamentally believe that a book writes itself, and that we the writers are just scribes who follow our muse. That and a lot of hard work, of course, is how it is done!

Where can readers find out more about you and your books?

You can see more about me on my website – www.patrickbrigham.co.uk and find my books with most well known book sellers, in paperback and Kindle.

Thank you for being with us today Patrick and I hope to have you again as a guest on my blog, talking about your new book and many others to come.
at November 13, 2013