Boris and The Goldfish Bowl – by Patrick Brigham 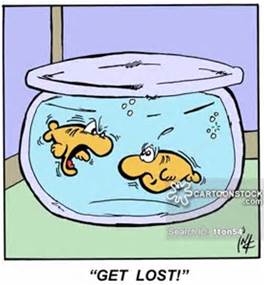 If the World was just a goldfish bowl,
Am I looking out or looking in?
Are the things I see,
As I should be,
And, shall I sink or swim.
Norris Throdes 1926 – 2015 The Bard of Wrexham, North Wales

As an old man, Norris Throdes became very angry. In his polemic written in 2015 and titled: “Not Another Bloody Referendum, Thank You Very Much,” he reached back into his past, searching for any plausible reason, why it was that the English permanently dominated British politics, and inevitably told The Welsh what to do.

At a time when few people had ever been abroad, Throdes cast his mind back to his past, in search of childhood clues, that might possibly explain the present state of affairs in British politics. Back in time - to the front room of his comfortable family home in pre WW2 Wrexham - he remembered his goldfish called Dave.

Somehow, he could imagine himself to be Dave, swimming around his glass bowl, casually wondering about the world outside. Was it true that the Earth was flat? Was it true that if you went far enough, you would drop off the edge, and land up in a horrifying place called America? Surely, it was much better to swim around aimlessly all day long, believing that you lived in perfect harmony with nature, in a perfect country, and in five litres of very clean Welsh tap water.

Norris Throdes mind started to race, and as it focused on his idyllic Welsh childhood, he began to adopt the goldfish’s persona, to ponder on his aquatic existence, and to speculate on possible life changing events to come. What would happen, if another goldfish was introduced into his bowl? Would there be enough space for two fish to coexist, and would it cause certain frictions to emerge - especially when it came to size and strength - and of course, the small matter of intelligence. That, of course, would rather depend on the second fish being a fellow male. If it was a female, of course it would be different, and Thodes could easily imagine himself swimming around after her, for all sorts of spurious reasons.

In order not to digress to much, Throdes finally concluded, that there had to be a second male in the bowl, in order for his analogous polemic to make any sense. His original goldfish he remembered, was called Dave, but what would be a good name for the second goldfish – if he were to introduce one into the goldfish bowl - that was his greatest problem. In the end the name Boris came to mind, and in his ever mushrooming dissertation on goldfish, Throdes could now see – in his mind’s eye of course - both Dave and Boris, happily swimming around together in a perfect harmony, in a shiny glass bowl in Wrexham.

Now the story began to unfold - in a very familiar way - because, in due course, Boris wanted to leave the goldfish bowl, and this was when the arguments started! 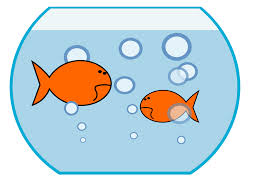 ‘You don’t know what’s out there Boris,’ Dave was becoming emotional, ‘and if you jump, who knows what will happen, because you will never be able to come back.’

‘Yes, but I want my own bowl to live in,’ Boris was beginning to sneer, ‘somewhere I don’t have to share with you, or any of the others. I’m sick of you all.’

‘But if you stay, we can look after each other, because we have everything we need. What’s wrong? Don’t you like me – is it because I look different?’

Boris’s eyes twinkled and although he had not fully considered the consequences, he laughed at Dave. ‘You’re pathetic,’ and he kept repeating it, as though Dave had no inkling about life or any future possibilities. ’Don’t you realize yet, that I am the greatest? I am indomitable, and not only can I foretell the future, I can leap into it.’ Having said which, he shouted ‘Goodbye Dave and the rest of you plonkers!’

Boris jumped out of the glass bowl and wriggling over the table, on which the glass bowl was standing, he landed on the floor with a thump. Soon the flapping noise became less and less, and finally nothing. Norris Throdes suddenly remembered his mother’s cat Tommy, and now - apart from the silence - all he could hear, was the sound of Tommy purring, and licking his paws.

I never knew what happened to Norris Throdes polemic, because a few days later he had passed away. His nurse, at the local ‘Home for The Permanently Bewildered,’ told me that, after I left, he had found it difficult to sleep. Apparently, being very short sighted, he had spent the night in the wardrobe, trying to find the light switch.

If the world is like a goldfish bowl,
Not looking out, but looking in,
Are those I see,
As I used to be,
And why they seldom win?