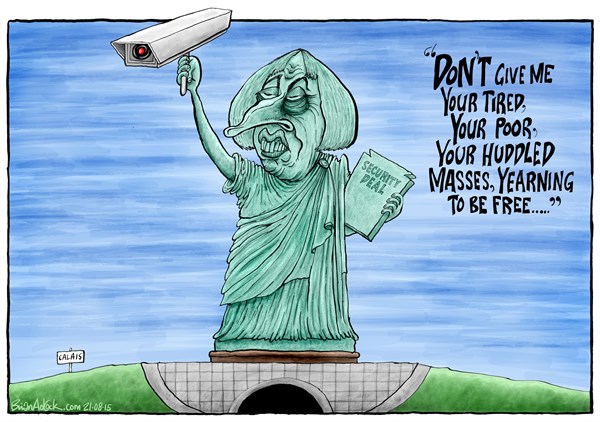 The European Union is a club, to which Great Briton has never truly belonged. The UK has never actually seen itself as European, despite its geography, and the spirit of a unified Europe has never been fully absorbed by Little England. It is a society which has become more inward looking over the years. To view the UK as being multicultural – other than in London – is a total anathema, and to see its inhabitants as thriving and happy, is a great mistake.

It is a country where multiculturalism is clearly regarded as more of a condition than a social reality – especially by those who voted to leave the EU – and we are left with exaggerated claims that the UK celebrates peoples differences, when clearly the opposite is true. As for Scotland and Northern Ireland, well, that’s a separate matter?

The 18th Century looms large over the whole Brexit issue, the UK’s colonial past, post WW2 political changes, and the ensuing British Commonwealth’s demand for political independence. What is clear, is the current British wish to return to a more easily recognizable historical past. Neatly dressed up in economic terms, and full of attendant allaballa, it simply represents the majority of referendum voters isolated and narrow views of the EU, which is – and always has been – the only real hope for a unified and peaceful Europe. 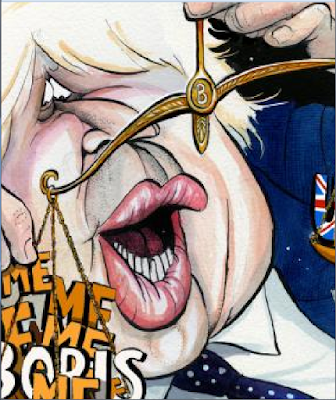 To see Theresa May, and her crowd of misfits, trying to piece together some recognizable plan for the future of UK PLC, is like watching a film called Carry On Brexiting, or indeed an episode of Hancocks Half Hour! Maybe the European Union will be better off without blustering Great Britain, a country seen as a winging consumer nation, run by opportunists, all of whom will be forgotten by the end of the debate. 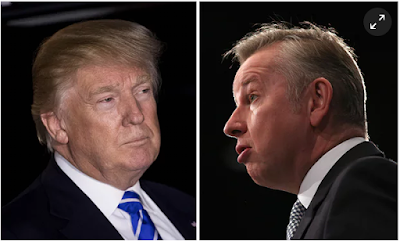 Trump talks to Michael Gove – the silliest man in England

Grabbing at straws, and consigned to the political doldrums, we recently saw the weak and characterless Michael Gove, toadying up to the mendacious and unpredictable American ‘head honcho,’ Donald Trump. Whilst trying to reclaim British political lost ground, as an alleged reporter for The Times of London, it is hard to imagine a more ridiculous advertisement for Donald Trump, Michael Gove, or even the Brexit itself. Speaking with the political understanding of a chipmunk, Trump – not only endorsed the continued existence of the silliest man in Briton – he underlined his own ignorance of history. 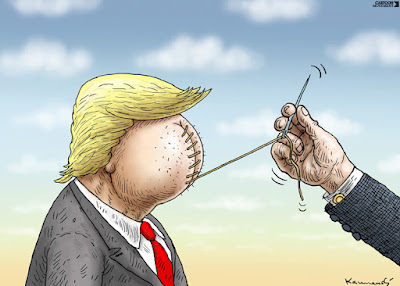 A President with a limited vocabulary

What do they say about Americans, that – ‘They go to war in order to understand geography a little better?’ So, who cares about Trumps views on Europe, and well done Mrs. Merkel for saying so! Trump claims to be an honest Wizkid American businessman, so, while we are at it, let me quote Balzac – ‘Behind every fortune there is always a crime.’ Tell me, who are we dealing with here, Laurel and Hardy, or the Godfather?

The Balkan News Magazine is just that, it is about the Balkans and the people who live in the region. But, expats are also from the Balkan region, a minority who mostly do not have a voice, when it comes to the mismanagement of their home country – the 15 year rule closes the voting booth for most of us – and so, we can only watch and wonder. Then the question immediately arises, of why we live outside our own countries?

In my short published BNM biography it says – ‘Patrick Brigham moved to London, and went into real estate. After the economic crash of 1989, he licked his wounds, wrote two books, and in 1993 he decided to abandon London, the UK casino economy, and moved to Sofia, Bulgaria.’

Well, that’s true, but what I forgot to mention, was that there were three previous British economic crashes that I survived, individually sufficient reason for me to abandon ship! Firstly, there’s Harold Wilson’s hiccup in 1969, closely followed by Edward Heath and the big one in 1974, and finally Margaret Thatcher mess in 1989. I come from a country that, like it or not, has a boom or bust economy, and one of which I finally got thoroughly sick of.

Others have had a similar experience, and decided to remove themselves from a high taxing, over populated, unpredictable, and the clearly unmanageable UK, in the vain hope of finding some sort of consistency in their lives. Despite its ups and downs, the EU remains a peaceful, predictable, and civilized place in which to live, and with few exceptions – especially Greece – long may this be so. But with both Putin and Trump seemingly determined to break up the EU – for various reasons which are not entirely clear – lets hope that Brexit isn’t the cause of the EU’s demise.

Todays January pronouncements by Teresa May, about Brexit, did little to calm the nerves of those awaiting a clear understanding of her government’s intentions. Most of us are tired of the getting ‘the best deal possible,’ condescending rubbish, and once again, we were still disappointed. We were told that finally, out meant out – for the umpteenth time – but this time it seems to be true. Out of the customs union, the single market, but also out to lunch.

I really do not believe that she has a clue about what to do, but nor do I believe that the future EU negotiators have any clear idea of what to do either; except perhaps, to use the same bullying tactics, which they used on poor little Greece. You might also wonder why an expat like me should have such a burning concern for the future of a country which he deserted twenty five years ago, but – despite everything – I am still an Englishman, and I do not want to see Great Briton, go down the drain, and revert once more, to a boom and bust economy, in a country which seems close to loosing its identity.